Sound settings or packages related to the sound system can become corrupt or broken. Many times, deleting the configuration files, reinstalling the sound-related packages, and reloading ALSA and/or PulseAudio can help. These commands can also help fix the Sound settings showing “Dummy Output” as the audio output.

If the system is not playing audio, first try restarting the PulseAudio daemon:

After restarting the daemon, applications may need to be restarted to re-connect to PulseAudio. If the system still isn’t playing sound, then try removing the user configuration files for PulseAudio:

Then, kill all instances of PulseAudio:

When PulseAudio starts again (which it should do automatically), it will create new configuration files.

The program PulseAudio Volume Control is helpful in figuring out which program is producing audio, where that audio is being routed, what the default input/output devices are, and what the volume levels are set to. It can be installed using the Pop!_Shop, or with this command:

Once installed, open the PulseAudio Volume Control app in the Activities menu, or run pavucontrol in a terminal.

The “Playback” tab will show a list of applications that are currently playing audio. The volume for each application can be individually controlled. 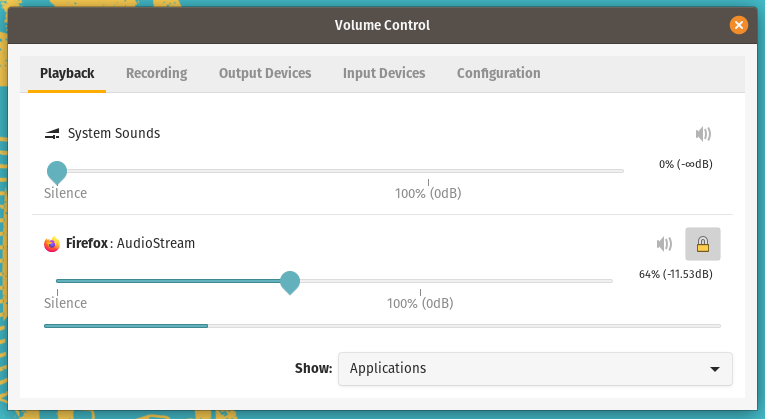 Similarly, the “Recording” tab will show a list of applications that are currently recording audio. 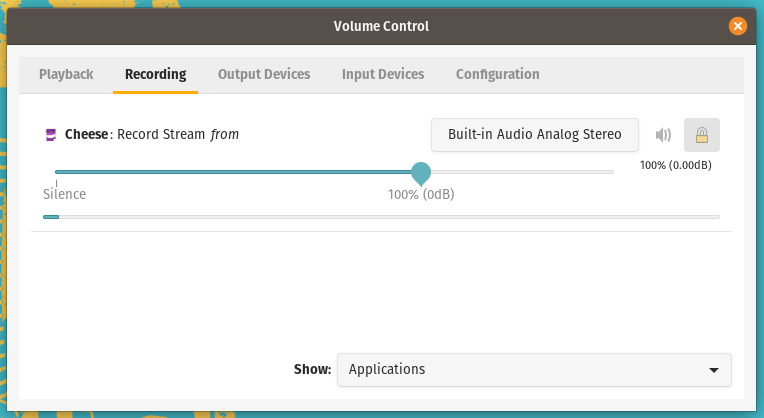 The “Output Devices” tab shows a list of output devices, and an indicator of what’s being played out of each device. The green checkmark being selected indicates a device is the default output device. 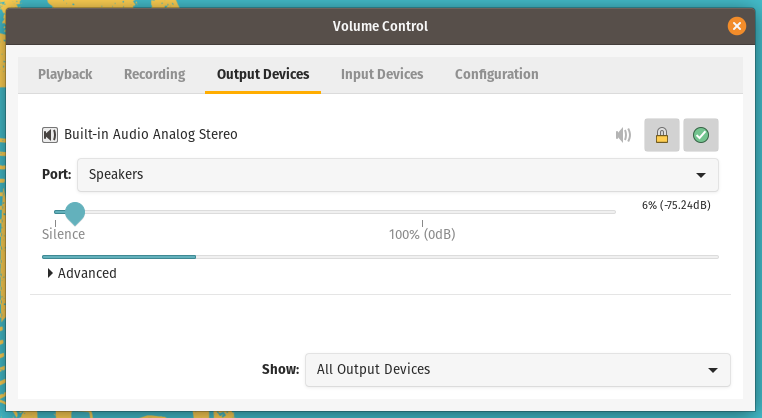 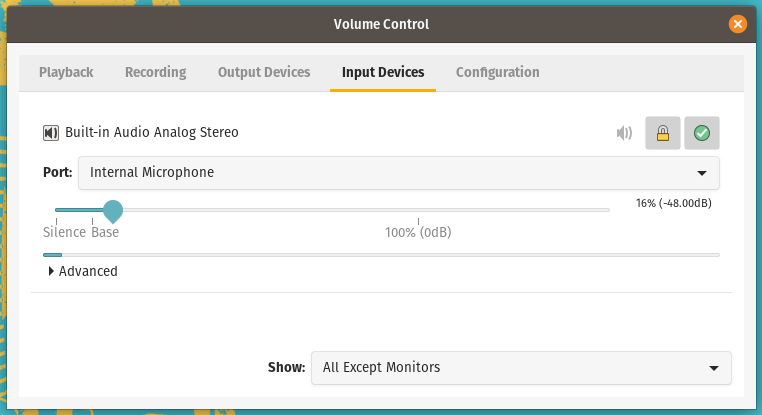 Under “Configuration,” each sound card should be listed. 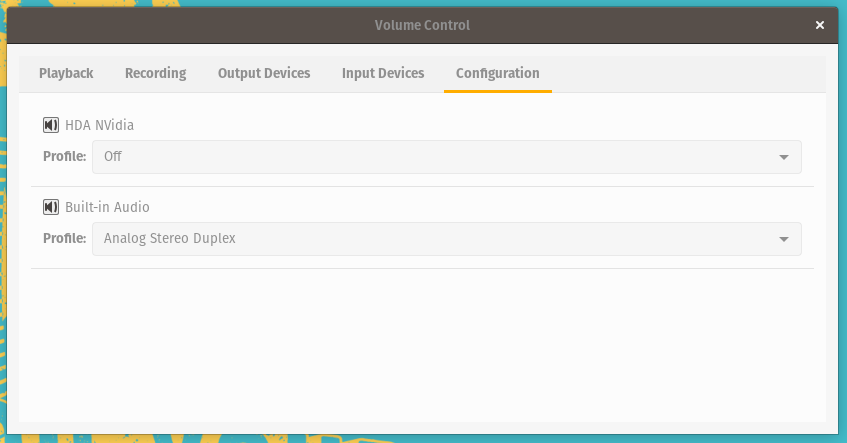 PulseAudio sits on top of ALSA. If PulseAudio is not seeing any input/output devices, check what playback devices ALSA is detecting:

Or, check what recording devices ALSA is detecting:

You can navigate between the different volume meters using the left and right arrow keys. Each meter can be adjusted using the up and down arrow keys. An “MM” at the bottom of a meter indicates that meter is muted. If the PulseAudio Volume Control shows that sound is playing, but you don’t hear any sound, try unmuting all of the volume meters in alsamixer by pressing the M key while each meter is selected. 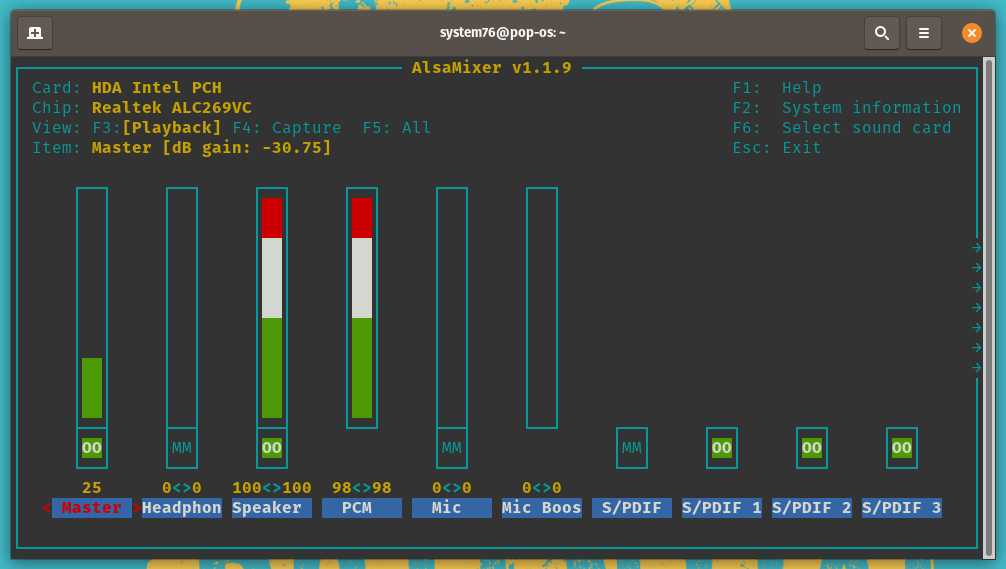 If your system has more than one sound card (for example, an Intel sound card and an NVIDIA sound card in switchable-graphics systems), you can switch between them by pressing F6. 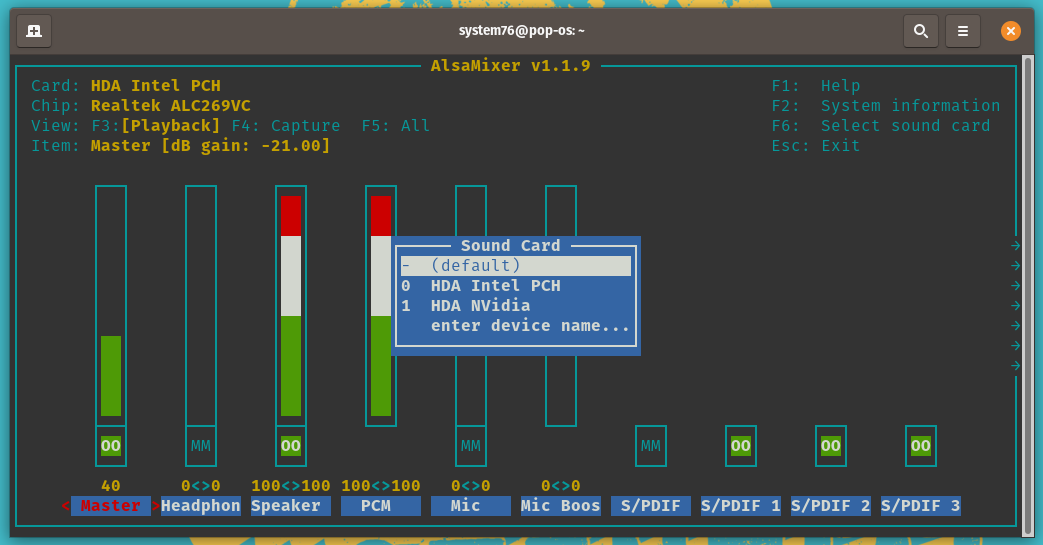 Check if Hardware is Detected

If ALSA doesn’t list a sound card, it may not be physically detected by the system at all. If the Linux kernel sees a sound card, it will show up in your lspci output. This command will list every sound card your system detects, and show the driver being used for each one:

If the output from that command is blank, then your system isn’t detecting any sound cards (which could indicate a hardware issue.)

This command will reinstall ALSA and some of the other core audio packages:

This command will reload the sound driver modules:

This command will start PulseAudio after it’s been stopped (this is not usually needed, because PulseAudio will usually restart itself when it’s stopped):

Some particular problems may be solved by tweaks to ALSA or PulseAudio configuration.

If you hear audio crackling (especially when you start or stop playing audio), PulseAudio may be putting your audio card to sleep too often. This is known to happen on the serw12 and some Thunderbolt docks.

These two commands will disable this behavior and restart PulseAudio:

This change can be undone using these commands:

With hardware that uses the snd_hda_intel kernel module, rare bugs can cause the sound card to not be detected. If you’re having this issue, try running these commands to force the usage of a specific audio driver:

Reboot after making the changes. If this doesn’t solve the issue, undo the changes using these commands:

The alsa-info command will gather a number of outputs, including some of the above-listed outputs, and package them so they can be shared easily. In a terminal, run the command:

When the script is finished gathering information, type y and press Enter to upload your output to the ALSA website, then send the link to Support. 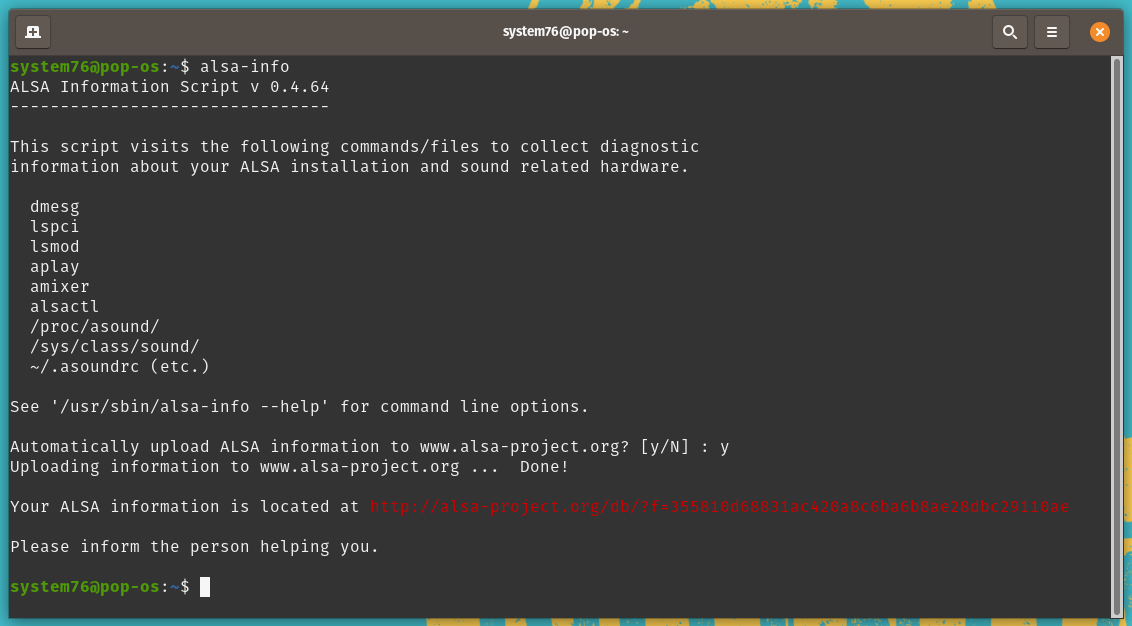