The following laptops have switchable graphics:

Integrated graphics mode uses the integrated GPU only and turns off the NVIDIA GPU. This mode uses less power, leading to a longer battery life and less fan noise.

Vulkan applications must be launched with the following command to be rendered on the dGPU (NVIDIA):

GLX applications must be launched with the following command to be rendered on the dGPU (NVIDIA):

Hybrid graphics mode is available on 19.10 and later.

Compute graphics mode uses the integrated GPU for all rendering. The NVIDIA GPU is left available, allowing it to be used as a compute node.

Pop!_OS by System76 includes the system76-power package, which includes the ability to switch between integrated, NVIDIA, and hybrid graphics modes.

You’ll only need to install this software manually if you did a fresh install of Ubuntu, as our installations will include these packages by default. You can do this with the following commands:

Then we need to load the extension with this command:

Now enable the System76 Power extension with the toggle to the right. 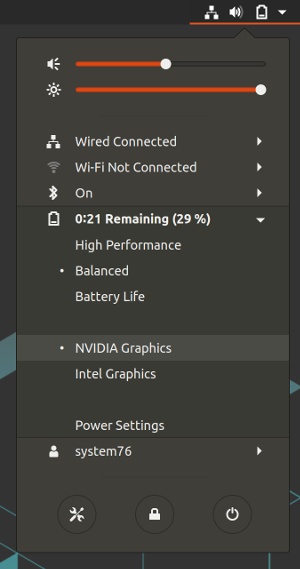 Click on NVIDIA, Integrated, Hybrid, or Compute depending on your use case.

Once you select a mode, you will be prompted to reboot.

From the command line

If you are not using the GNOME Desktop Environment, you can use the system76-power command line tool. You can see the options with this command:

For seeing which graphics mode the system is using:

For switching to NVIDIA Graphics:

For switching to integrated Graphics:

For switching to hybrid graphics:

For switching to compute mode:

The source code for the system76-power utility and the GNOME Shell extension can be found on GitHub: